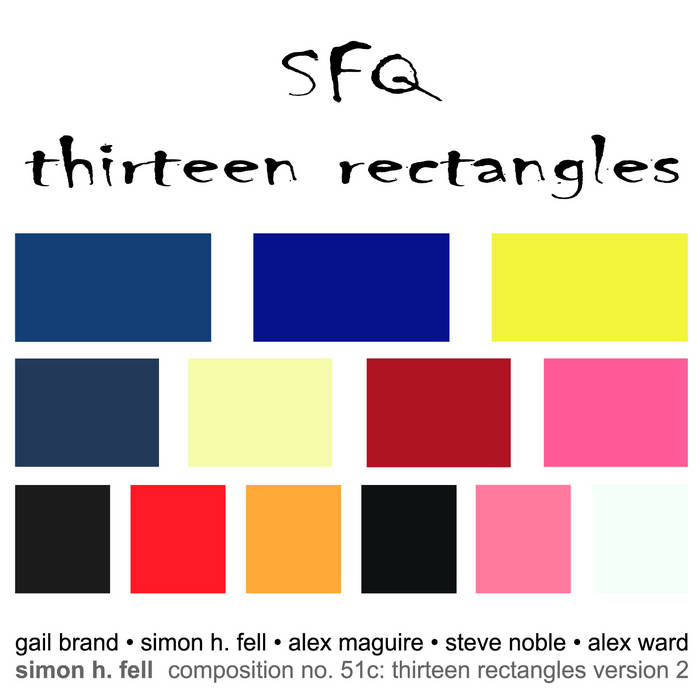 "Outstanding! Simon Fell is at the forefront of developing musical structures which release - rather than constrain - his collaborators." Jez Nelson JAZZ ON 3, BBC RADIO 3

"Captured in one breathtaking take, Thirteen Rectangles is an exceptional work. Even though the piece is scored for small group, Fell thinks big, leaving plenty of room for solo playing. The asymmetrical swing of the matching sequences bookending the work recall Anthony Braxton's writing for jazz chamber orchestra. The music in between draws jazz, free Improvisation and post-serial composition into the same gravitational field, where they hybridise and mutate. It's edgy and insistent, characterised by "neurotic rhythms". The players chisel away repeatedly at Fell's deliberately meagre allocation of thematic material, but he has jettisoned the formulaic cycles of standard jazz composition in favour of "mobile form". Written and improvised passages are heard in combination throughout. This complex, stimulating simultaneity sets up exhilarating juxtapositions and conjunctions that rise through the music's continually shifting layers. Fell strives to actualise the music he wants to hear but which doesn't yet exist. His creative vision and individual labour might prepare the ground, but it's the personality and abilities of the performers that bring his concept to fruition. He's fortunate to have such dedicated, ingenious collaborators, who each bring a distinctive slant to unlock the composition's abundant potential." Julian Cowley THE WIRE

"By any account, Simon Fell is one of the most important musicians working today. As improviser, composer, and musical organizer, the depth and range of his music is truly staggering. Throw on the onslaught of Hession/Wilkinson/Fell's The Horrors Of Darmstadt, the microscopic reductivism of IST's Ghost Notes and the multi-layered compositional form of Composition No. 30: Compilation III back to back and it seems almost incomprehensible that they are all facets of the same musician. Until, that is, one takes a more careful listen. Because at the root of these diverse sonic explorations is an insatiable fascination with the intersections (and contrasts) between structure and collective, spontaneous improvisation and a finely honed attention to density, timbre, and textures. This can sometimes make for demanding listening, but with Fell, it always pays off. Like Anthony Braxton's quartet music, Fell here has assembled a multi-layered music out of a series of overlapping events, composed with the specific players in mind. The extended suite is comprised of tight collective counterpoint, lithe sub-groupings, and heated solos. Any of the players can pick up a thread and run with it, either as a solo voice or superimposing refractions of time, theme, or ensemble textures. Recorded in one take, the mutable amalgam of improvisation and composition can swing like mad or move into thorny freedom with split-second shifts of direction as the focus moves around the ensemble. This is a startling and exhilarating work that easily shoots to the top of any list of the year's best releases." Michael Rosenstein SIGNAL TO NOISE

"For those unfamiliar with Fell, he is one of England's and perhaps the world's most creative bassists and composers. Fell, like so many other talented and creative improvisers, continues to have a low profile, which is unfortunate as his technical and compositional abilities are both compelling and unique. That being said, these three releases (Axis Of Cavity, Thirteen Rectangles & Improvabilly) demonstrate that he is not afraid of taking significant risks in order to make absorbing music that pushes the envelope far into the 21st century. Simply put, Thirteen Rectangles is a major work and thus, is one of the most important releases of 2002. Fells goal is to utilize a compositional form in a way that is structured, yet allows the musicians the freedom to "invert, alter, pervert or ignore" the structure altogether. Such a mindset paves the way for evolution as each individual musician's contribution adds shape to the total whole. On the whole, this is a progressive piece of music that sounds as if Fell's influences range from Mingus and Braxton to 20th Century classical. It is demanding not only on the listener, but also the musicians, as it is filled with advanced rhythmic and harmonic ideas. Perhaps most interesting is that as one listens to the piece, although two or three recurrent themes appear throughout, it is difficult to tell the difference between the composed and improvised portions unless one is reading the score simultaneously. SFQ is comprised of some of the London improvised music scene's most important young musicians and, due to the complexity of Thirteen Rectangles, requires excellent musicianship. Fell's collective is up to the task, each adding their own style, yet pulling off the difficult passages. The different rectangles provoke different moods and sounds, as heated exchanges, quiet meditative passages, out and out blues, swing or total abstraction are all heard. Another enticing aspect of this work is the way that groupings are encouraged, as the soloists separate into groups within the larger quintet. Particularly compelling are the clarinetist Alex Ward and Fell on Rectangle 2, pianist Alex Maguire and trombonist Gail Brand on Soft Hard (Interpolation 2) or Wand and Brand on Rectangle 8. This performance commences with Start Frame + Soft Hard (Interpolation 1), a bouncy angular theme with Bop-influenced notions. This theme appears throughout, in different permutations, but also closes the performance as a fitting summation of all that has come before, a tying up all loose ends into a unified whole. The brilliant clarinet playing of Ward is introduced right at the start. He is the standout soloist here, consistently inventive and versatile, whether called upon for slight, staccato lines, slurs in the tradition of Jimmy Hamilton (Rectangle 8) or swirling, unraveling note clusters. Noble is mostly in the colorist mode here, whether the piece demands floating cymbals (Rectangle 2), rumbling toms (Rectangles 4 & 5), spacey, nimble brushwork (Soft Hard [Interpolation 2]), or bluesy timekeeping (Rectangle 9). Brand's contributions are valued throughout whether as a provocateur (check out her plunger work) or as a soloist. Maguire is also commanding and creative, whether asked to generate Cecil Tayloresque mayhem, subtle chord sequences or long, flowing legato lines. As for Fell, there is not much more to add that has not been stated above, as his acrobatics do not subside. In sum, this is an engrossing piece, at a hair over 70 minutes in duration, requiring undivided attention. It is sure to be a divisive piece as well, given its ambitious nature. I found it to be a rewarding listen and frankly, have reached the conclusion that Fell has truly created his masterpiece." Jay Collins CADENCE

to see full press quotes/reviews for this album, visit www.brucesfingers.co.uk/catalogue/bf43reviews.html

Formed in 1999, SFQ was planned as a small-scale, regularly performing unit which would enable Simon Fell to bring his compositional theories and discoveries to bear on an organic, flexible group, featuring some of the finest musicians available. SFQ saw Fell returning to his love of contemporary and experimental small-group jazz-derived composition.
[photo: Jo Fell] ... more

Bandcamp Daily  your guide to the world of Bandcamp

Khruangbin and Greg Foat stop by with their amazing new LPs.